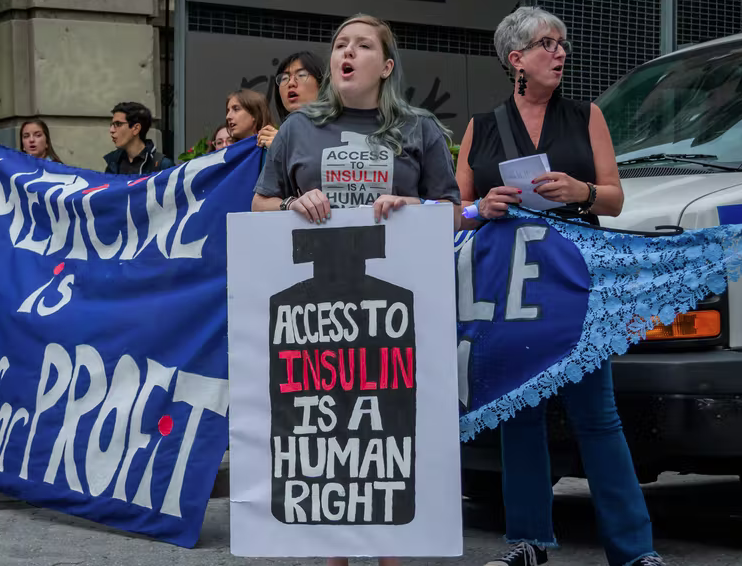 WASHINGTON — Lacy Mason was a 21-year-old graduate student in Atlanta when she began rationing her insulin. As a type 1 diabetic, she must take insulin every day to survive. But when the cost soared to $960 a month, Mason couldn’t afford it anymore.

She had aged out of Medicaid, and her student health insurance didn’t help. So she counted the vials she had stored in her fridge and did the impossible math trying to figure out how to make her supply last until graduation. She was a year younger.

Mason is one of many diabetics to ration this life-saving drug as the cost of the four most popular types of insulin has tripled over the past decade, according to the American Diabetes Association. In the United States, 1 in 4 people with diabetes have resorted to rationing their insulin, according to the group.

In response, Congress is considering legislation that would cap insulin co-payment at $35 for Americans with private health insurance. The House passed a bipartisan bill in March, and lawmaker aides working on the issue say it’s a placeholder for what will be a bipartisan Senate compromise. They hope the Senate can pass it as a standalone bill this summer.

But the House bill does not address what happens to people without health insurance, or do anything to curb the skyrocketing cost of insulin, health analysts say.

Mason, for example, worked weekends and connected with other diabetics on a “black market” to survive – she met people in parking lots to buy insulin, used expired insulin and accepted leftover insulin from deceased relatives of friends.

She can now afford insulin through a combination of employer insurance, coupons from insulin manufacturers, and her full-time job.

But Mason wants the feds to step in, so she and everyone else whose life depends on insulin doesn’t have to worry about whether they can afford it in the future.

“The main thing that really bothers me with my story is that no matter what demographic or region you are in, you can always fall into an underinsured or uninsured category and end up in a position where it’s really hard to afford, and it still happens,” Mason said.

Monthly co-payments on insulin or other diabetes supplies are already capped in 20 states, including Virginia. In nine of those states, the cap is $35 or less. Virginia sets its cap at $50 a month in 2020, following similar moves from Colorado and Illinois.

Now the issue has gained momentum on Capitol Hill. Sen. Raphael Warnock, a Georgia Democrat, introduced a bill in February that would cap insulin copayments at $35. It has the support of the American Diabetes Association and 35 Democratic co-sponsors. Warnock promoted the issue with events in Georgia and Washington, D.C.

His proposal could provide financial relief to at least 1 in 5 insulin users with different types of private health insurance, according to an analysis of insurance claims data from the Peterson Center on Healthcare and the Kaiser Family Foundation.

But the legislation would offer no additional relief to the uninsured, health policy analysts say.

The House of Representatives passed its version of the bill, which Rep. Angie Craig, a Democrat from Minnesota, introduced in late March with unanimous support from Democrats and the backing of 12 Republicans.

Now he sits in the blocked Senate. Senate Majority Leader Chuck Schumer said he would try to move the issue forward and put the House bill on the Senate calendar in late May.

The procedural move does not guarantee that the Senate will ever vote, but allows legislation to come to the Senate without going through the full committee process first.

Warnock sent Schumer a letter on June 6, saying he was “deeply disappointed” that the legislation had not received a vote and thanking him for moving the process forward.

“Now is the time for action on this critical issue, and we can’t afford to wait any longer,” Warnock wrote.

Separately, the senses. Jeanne Shaheen, a Democrat from New Hampshire, and Susan Collins, a Republican from Maine, are co-chairs of the Senate on Diabetes and lead negotiators for a bipartisan effort in the Senate.

“Reducing the rising costs of insulin is a critical area where Democrats and Republicans are finding common ground. I am pleased to join Senator Collins in this effort, and we will continue to work to finalize our proposal. to submit it to the Senate for a vote,” Shaheen said in an email to States Newsroom.

Shaheen and Collins asked their Senate colleagues for comment in April as they worked to finalize a bill. Their plan includes the copay limit of $35. They also said they want to encourage insulin makers to lower list prices by limiting discounts for insurance plans and drug benefit managers.

They get estimates from the Congressional Budget Office on the cost of their proposals, according to staff.

“Congress has a critical opportunity to address high prescription drug costs and help working families — we must seize it,” Shaheen said.

But the legislation faces major hurdles, as lawmakers raise issues ahead of the 2022 election – an election that will be hotly contested for Warnock, which won a special election in 2020 and is on the rise again this year. against Republican Herschel Walker. Republicans may be hesitant to give Warnock a win.

And the proposals can get tricky as some insulin makers and patient advocates call for different approaches.

An earlier, separate attempt to tackle prescription drug prices under the Build Back Better Act cleared the House but stalled in the Senate.

Executives from the three major insulin companies – Eli Lilly, Sanofi and Novo Nordisk – have shunned responsibility for high insulin prices. They told lawmakers in congressional hearings in 2019 that they couldn’t lower insulin prices because of how health insurance companies and drug benefit managers operate.

Well-established rebate systems sometimes reduce the price paid by health plans for insulin by 70% or more, but these savings are not always shared directly with patients.

The Federal Trade Commission, the agency that enforces consumer protection laws, is also looking at discounts and fees given to drug benefit managers, and how these drive up the costs of insulin and other medications. . The FTC was expected to discuss the matter at its next meeting.

A Lilly spokesperson said in an email that the company has not approved current legislation that would cap co-payments, but that Lilly would like to see solutions to limit out-of-pocket charges or pass on discounts directly. A Sanofi spokesperson said the company supports efforts to cap monthly copayments, requiring rebates to be shared or forcing insurers to cover insulin without charging a deductible.

Warnock said he was working to break the partisan deadlock to push legislation forward in the Senate.

“I was able to build a coalition to support this legislation that spans from grassroots activists to the White House,” Warnock said in an email. “I’m working with my Senate colleagues on a bipartisan solution that will not only cap insulin costs, but also address high insulin list prices.”

A co-payment ceiling helps the insured. But lawmakers have yet to decide how to deal with rising insulin prices for everyone who needs it.

“The insulin out-of-pocket cap doesn’t change how much society pays for insulin or how much health plans pay,” said Krutika Amin, who tracks health care costs for the Kaiser Family Foundation.

Insulin prices have risen far beyond inflation rates – more in the United States than in the rest of the world. Americans pay an average of 10 times more for insulin than people in other developed countries, according to a federal government analysis.

Laura Marston, co-founder of advocacy group The Insulin Initiative, says a co-pay limit alone is not enough for what is needed. His group is pushing for a cap on the list price of insulin, or the price that insulin companies can charge. She wants a federal limit to lower the price for everyone, including the uninsured.

“If the uninsured aren’t included, they have to pay full list price or die trying,” Marston said.

Marston, a lawyer and type 1 diabetic, has seen firsthand how difficult insulin payments can be when a former employer dies and her office closes, suddenly leaving her without health insurance or the ability to pay for her insulin.

“In the blink of an eye, I went from being great to not having insurance and not having a way to get insulin,” Marston said. “That’s the tightrope we walk on when the price of a vial of insulin is cleared at $300.”

Get morning headlines delivered to your inbox