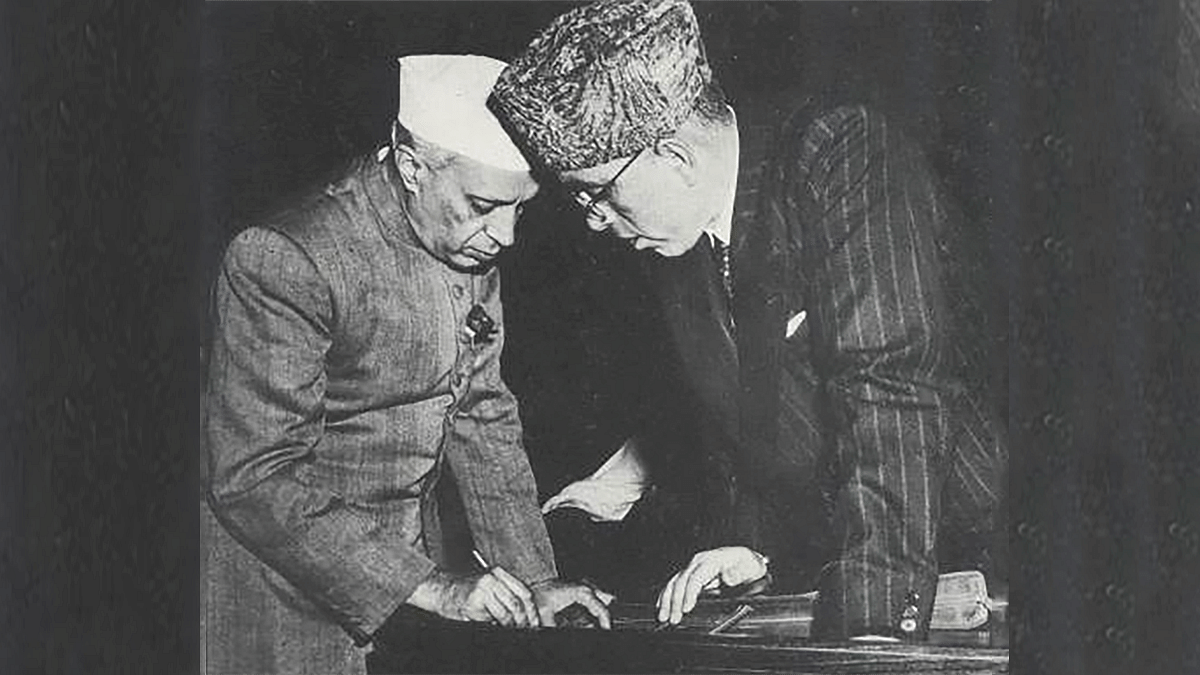 Before Article 370, Nehru was ‘irritated’ by Sheikh Abdullah interview in Kashmir

OOn April 17, 1949, Nehru wrote to Sardar Patel about an intelligence report which indicated that the Praja Parishad – a Jammu-based political party affiliated with the Rashtriya Swayamsevak Sangh – was calling for an area plebiscite. Nehru felt this was detrimental to India’s interests and took particular note of the fact that the party was funded by the Maharaja through the Dharmarth Trust. Continued public differences between the Maharaja and Sheikh Abdullah were weakening India’s image internationally, and Nehru said, almost ominously, that ‘it is no longer safe for us to let things drift’ . He referred to a previous discussion with Sardar Patel, which also involved Ayyangar, where it was decided that the future of the monarchy in Jammu and Kashmir should be decided by the people of Jammu and Kashmir acting through the through a Constituent Assembly. For this to happen, he suggested that the Maharaja should be asked to leave the state for a while.

A month later, Nehru reiterated his concerns over the continuing divisive activities of the Praja Parishad in Jammu. The Parishad sought membership on behalf of the Maharaja and spread a rumor that Sheikh Abdullah “wants to dethrone Hari Singh and become the Maharaja himself”. Nehru wrote to Sardar Patel that “be that as it may, this public discussion of these issues is obviously harmful”.

As the activities of the Praja Parishad increased, Patel transmitted to the Maharaja and
Maharani during the meetings held on April 29 and May 1, 1949 that they leave their state7.
Maharaja demanded certain assurances in return.8 These included guarantees against forced abdication, against any change in the ruler’s constitutional position without his consent, and against Sheikh Abdullah reviling him further.

It was common knowledge that the relationship between Abdullah and the Maharaja was beyond repair. Asking the Maharaja to leave would no doubt bring some respite, but equal
the concern of Indian leaders was Abdullah’s own indiscretions at the time. In April 1949, he told a British newspaper that joining India or Pakistan could not bring peace to Jammu and Kashmir. Rather, advocating for an independent Jammu and Kashmir benefiting from the friendship and economic cooperation of the two countries, he added that “a
an independent Kashmir must be guaranteed not only by India and Pakistan, but also by Britain, the United States of America and other members of the United Nations”.

Sardar Patel, in a letter to Ayyangar, remarked caustically that “[a] vehement exponent of membership in India seems to have converted”. In response, Ayyangar expressed fear that Abdullah’s statements “would have the most serious and perverse consequences both in India and abroad”, and that it could ultimately lead to “perhaps one of the greatest betrayals in history”. He expected Abdullah to publicly repudiate some of his comments.
While the content of Abdullah’s statement would have raised eyebrows among Indian leaders at any time, the timing in this particular case was particularly concerning. Echoing Ayyangar’s concerns, Nehru wrote to Abdullah and almost reprimanded him, saying “you and I are in positions of responsibility and cannot toss out suggestions”. He specifically referred to the pernicious effect this would have on UNCIP and the delicate stage India was currently in in this regard. Incidentally, he told Abdullah that “the less we say, the better”.

With UNCIP negotiations in full swing and issues in Jammu and Kashmir far from resolved, developments surrounding Abdullah have become a matter of deep concern for Indian leaders. Patel and Ayyangar never gave him much thought anyway – they would have much preferred a calm, predictable and non-controversial leader at this stage. But for a while now, from his press conference attacking the Maharaja in September 1948 to his comments on independence in April 1949, Abdullah has fallen somewhat short of that expectation. Even Nehru, whose relationship with Abdullah at the time is best described as brotherly, had mixed feelings. In a letter to VK Krishna Menon on May 14, 1949, he writes:

“Shaikh Abdullah, an excellent man and a very effective popular leader, rather misses
political foresight and has a knack for saying the wrong thing. He is strongly influenced by
odd groups. His recent interviews in the British press on the independence of Kashmir
irritated me a lot.

These developments prompted Indian leaders to reach a decisive agreement on the
internal governance of Jammu and Kashmir. On May 15 and 16, 1949, meetings were held at Sardar Patel’s residence involving National Conference leaders and their Indian National Congress counterparts including Nehru, Abdullah and Ayyangar on the future of the state. Apart from matters relating to the state forces and the Indian military, these critical meetings also discussed the drafting of the state constitution, the topics that the state would accede to India and the future of the Dogra monarchy.

Two days later, on May 18, 1949, Nehru sent a draft to Abdullah which summarized the understandings the two sides had reached in their meetings. of the State, of accession in addition to those contained in the instrument of accession, and questions relating to the monarchy of the State should be decided by the people of the State represented in a constituent assembly.

Even at this crucial juncture, however, there is reason to believe that Sheikh Abdullah’s primary concerns were with the internal constitutional issue, ie power-sharing with the Maharaja. Before sending the draft to Abdullah, Nehru wrote to Sardar Patel referencing the verbal assurance given to the National Conference leaders regarding the Maharaja’s departure from the state for the time being. Nehru hoped that this verbal assurance, along with the written draft containing the agreements reached at the meetings, would put an end to Abdullah’s public bickering. In a separate informal letter accompanying the draft, Nehru explicitly asked Abdullah “to avoid raising personal and controversial issues in public” since major issues relating to the future of the state of Jammu and Kashmir had now been settled to their mutual satisfaction.

A few days after this meeting, Sardar Patel replied to the Maharaja on the question of the assurances he was seeking. He assured him: “The question of Your Highness’ abdication does not arise. We have clearly explained the position to Sheikh Mohammed Abdullah, and we hope that there will be an end to the public controversies centered on this issue as well as to the derogatory references to Your Highness in the press and on the state platform. . However, as per what was decided in the meetings, Sardar Patel also clarified to the Maharaja that the future state constitution would be determined by the duly elected Constituent Assembly of Jammu and Kashmir. Therefore, the assurance regarding the abdication was in truth only of a provisional nature, and within weeks the Maharaja nevertheless issued a proclamation, dated June 9, 1949, entrusting all his powers to his son, Yuvraj Karan Singh.

It seems that even before the formal draft of the position agreed with India was sent to
Abdullah as well as the informal request to avoid controversy, the meeting had
succeeded in achieving its immediate objective. On May 17, 1949, Abdallah repudiated
his earlier statements regarding independence, stating that independence “can be and is a

Excerpted with permission from Navi Books, an initiative of the Vidhi Center for Legal Policy, from Hamīñ Ast: A Biography of Article 370 by Arghya Sengupta, Jinaly Dani, Kevin James and Pranay Modi. The book is available at http://navibooks.in

7 sad movies that will make your dog want to cuddle