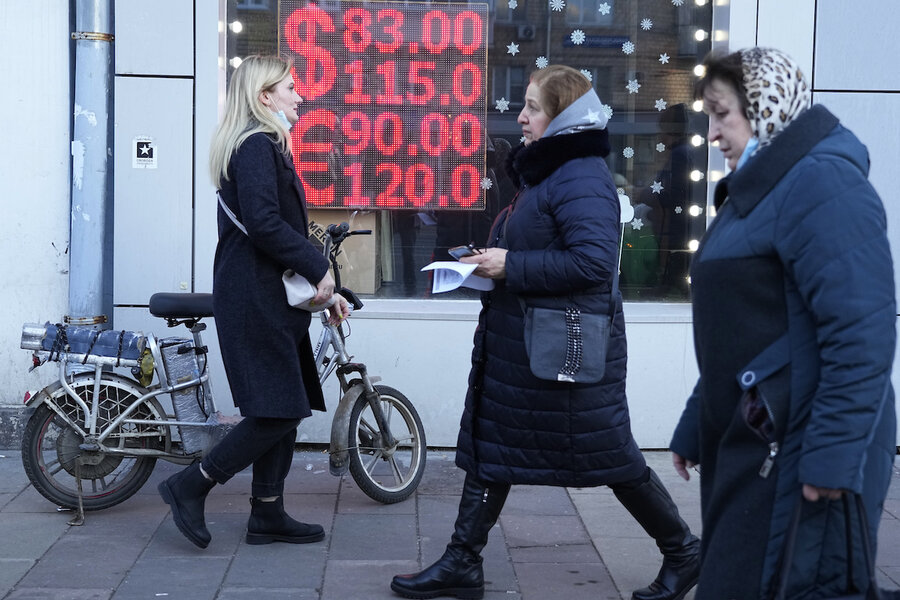 Since the West imposed sanctions on Russia for its invasion of Ukraine, ordinary Russians have been feeling the painful effects – from non-functioning payment systems and problems withdrawing money to the inability to buy some items.

“Apple Pay has stopped working since yesterday. It was impossible to pay with anywhere – on a bus, in a cafe,” Moscow resident Tatyana Usmanova told The Associated Press. “Also, in a supermarket, they limited the amount of essentials a person could buy.”

Apple announced it would stop selling its iPhone and other popular products in Russia, while limiting services like Apple Pay as part of a broader corporate response to protest the invasion.

Dozens of foreign and international companies have withdrawn their activities from Russia. Major car brands have halted exports of their vehicles; Boeing and Airbus have suspended the supply of aircraft parts and services to Russian airlines; major Hollywood studios have halted film releases; and the list will likely continue to grow.

This is in addition to the United States and other Western countries hitting Russia with sanctions of unprecedented scale and severity. They expelled major Russian banks from the SWIFT international payment system, limited high-tech exports to Russia, and severely restricted Moscow’s use of its foreign currency reserves.

Russians in Moscow and other cities spoke to the AP about how these moves played out in their daily lives, pointing to problems converting rubles into foreign currency, long queues at ATMs and some bank cards that failed them.

Irina Biryukova in Yaroslavl, a town about 250 kilometers northeast of Moscow, said she could only deposit a limited amount of money into her bank account through ATMs.

“The majority of ATMs [of this bank] don’t work to deposit [money]said Ms. Biryukova.

According to some companies, food prices have also started to soar.

“All the main ingredients from which we prepare our products have increased by 30-40%,” said Ilya Oktavin, who manages the delivery service at a sushi bar in Perm.

Some products are also harder to find due to actions by companies like Nike, which halted online sales late Tuesday with a statement on the company’s website saying it “cannot guarantee delivery of goods to buyers in Russia”. On Wednesday, H&M announced it was suspending “all sales” in the country.

“We are facing rising prices, massive layoffs, delays in the payment of benefits or pensions,” opposition politician Yulia Galyamina wrote on Facebook on Wednesday. “Shortages of medicines and medical equipment. Aging and impoverished automobile and aeronautical fleet. … We will remember the 1990s as hardly the worst period. But I have only one question: what for?

In what looked like an effort to prevent panic, Russian authorities on Tuesday launched a special website, titled “We Explain”, which explains how various areas of life are functioning under the pressure of sanctions. Disturbing reports, such as those anticipating price spikes or saying certain services aren’t working, are debunked on the website as “false.”

Some Russians, meanwhile, say it’s not so much the sanctions that worry them, but the deadly attack Russia has carried out on a neighboring country.

“You know, it’s the sanctions that bother me the least. I fear that Russia will kill people in Ukraine,” said Moscow resident Ivan Kozlov. “I wish this would stop the war that no sane person with a conscience and capable of mercy and compassion in Russia wants.”

Anti-war sentiment in Russia is widespread. Thousands of people have signed open letters and online petitions asking to stop the invasion, with the most widely supported online petition garnering over a million signatures within days.

Get stories that
empower and uplift Daily.

Russians across the country have taken to the streets almost every day since the attack began last Thursday. More than 7,000 protesters were arrested last week, according to OVD-Info, a rights group that tracks political arrests, with nearly 600 arrested as of Wednesday.

This story was reported by the Associated Press.