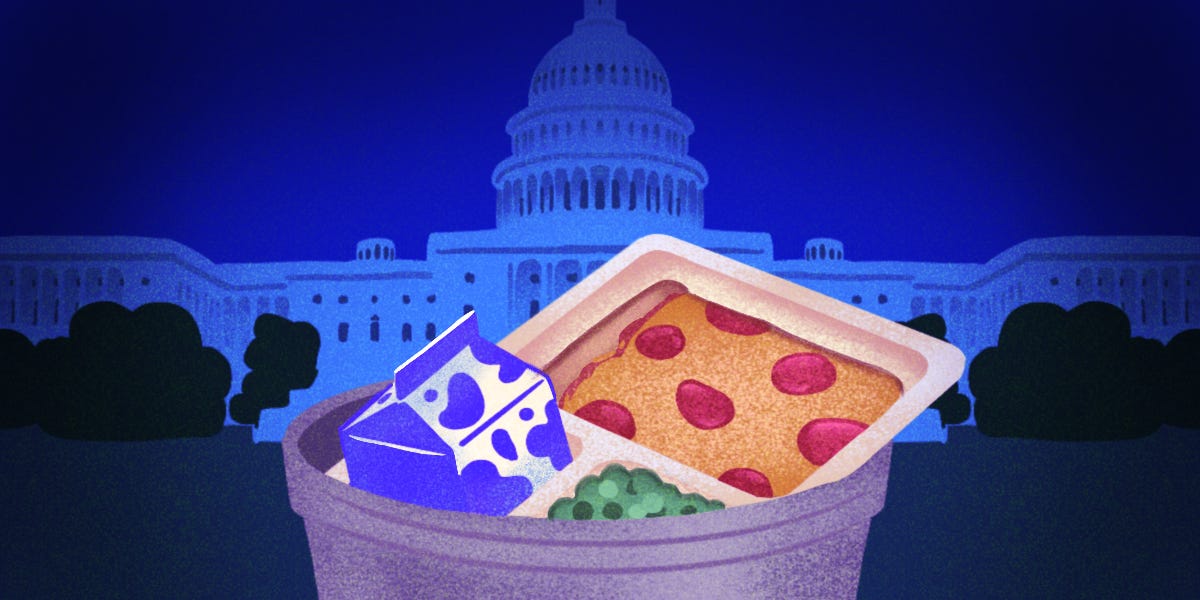 Congress has made school lunches free. Now the Republicans will end this.

Before the pandemic, Jennifer Kapinus, who is food manager for a school district in rural Wisconsin, found herself doing something she hates: playing debt collection.

Every week, she would find herself calling parents about the debts their children had accrued from buying school lunch. Many parents who would qualify for free or reduced-price meals never applied, for a number of personal reasons.

While “thankfully” the district would never take student meals away, Kapinus said, she would have to call parents and send letters to get them to pay off the debt they “honestly can’t afford to pay.”

Kapinus is not alone: ​​Leah Botko, director of food services in Massachusetts, said there is about $20,000 in unpaid student debt each year in her district.

Then the pandemic hit. In 2020, the government has taken several extraordinary steps to keep Americans afloat, from stimulus checks to improved unemployment benefits. This included waivers making school lunch free for every K-12 student.

The waivers meant children didn’t go into school lunch debt or face the shame of having a free or discounted lunch – and meal providers could expand the food they offered to their students.

But Republicans are blocking the renewal of the waivers, spelling out a potential June 30 end to the program.

In the Kapinus district, where meals are now free, participation has increased sharply. Ditto for Botko, whose program fed about 40 children a day. Now they feed at least 280 a day.

The more children they fed, the more reimbursement they received from the federal government. The Kapinus district was able to afford to “feed our children better and healthier”, by buying local meat and fresh produce. They were able to hire staff and replace equipment. Botko has teamed up with a local farm down the street to buy produce.

It helps the local economy, Botko said, and it helps parents participate more in school meals.

“They don’t see school lunch as something out of the freezer anymore. It just comes down the street,” she said.

Congress extended the program once in 2021, ensuring that the nearly 12 million children who did not have enough to eat at some point in the pandemic could get food at school. But lawmakers — and, in particular, Senate Minority Leader Mitch McConnell — chose not to renew the universal program under the spending package passed in March that kept government open.

However, a bipartisan agreement was reached to renew a limited waiver program that would ensure some children could still get free meals during the summer.

Some states like California already have universal school lunch programs. State legislators in New York, Massachusetts and a handful of other states are trying to establish their own programs, but students in most states will be left out once the federal program ends.

“You’re creating an equity issue based solely on the geography of where these kids live,” Meier said.

To qualify for free meals during the 2022 school year, a family of three must earn an income of $29,939 or less, considered 130% of the federal poverty level. It’s a sharp reversal from the expansion of the past two years, which opened up free lunches to all students, regardless of family income.

Republicans have lined up against renewing universal free lunches, arguing that it is a pandemic-era program that should not be made permanent. Sen. Rand Paul of Kentucky opposed the rapid passage of a bipartisan agreement to extend a scaled-down version of the program beyond June 30. But he got some changes that allowed the Senate to pass it, sending it back to the House before Biden signed it. .

“Children deserve to be healthy, they deserve to be well nourished, and by extending these nutritional waivers before they expire, we can ensure that no student will have to worry about where they are going. eat lunch during the summer,” the Senate said. Majority Leader Chuck Schumer said Thursday.

Some children have only known schools with free and universal meals

Some kids, especially younger ones, may not even remember a time without a free lunch.

“They have now lived the majority of their lives in public school during a pandemic, where the school is a guaranteed provider of meals. That will go away for them,” said Jillien Meier, director of partnerships and campaign strategies. for the advocacy group No Kids Hungry. , said Insider. “I don’t think they’re aware of it, but I guarantee you the first day of school, if there’s no food in front of them, that’s when it’s going to be a problem.”

Amy Frewing distributed some of these lunches. She works in the library of a large elementary school in suburban Oregon and distributed library books to children through a pick-up window during the height of the pandemic.

She found that families came to school at a certain time each day to eat their meals as part of the program. She changed her library window time to coincide with lunchtime pickup, so kids could get their books and lunches at the same time. During a time of isolation, especially for students and teachers, that meant she had to see some of the same people every day.

“They never had to verify that they were a student of the school,” Frewing said. “They never put a limit on how many lunches they could get, and it was always a healthy snack selection.”

She said the program has helped de-stigmatize children who eat their meals at school. Everyone was treated the same – unlike what she saw growing up, where kids who had a cut-price lunch had different colored tickets in the cafeteria.

On Fridays, she would send families home with larger bags to cover dinner and other weekend meals.

“When the basic needs for food and shelter are not met, I think that’s unconscionable. It’s a basic human need,” Frewing said. “I know there are a lot of people who think that, oh, people need to pull themselves together and this is the land of opportunity and there are so many jobs available. Try saying that to a single mother with children who use the majority of their money just to cover housing.”

Botko, the Massachusetts food services director, sends emails from parents asking if lunch will be free next year. She expects parents to be upset, attendance to drop, and she will have to end relationships with local food sources.

When she was a child, Botko qualified for a discounted lunch. She never took advantage of it, however, because she was ashamed. History could repeat itself as the waivers end.

“I feel like the kids are going to be embarrassed to have lunch again,” she said.

Another Voice: Lead poisoning should be covered by insurance | Opinion