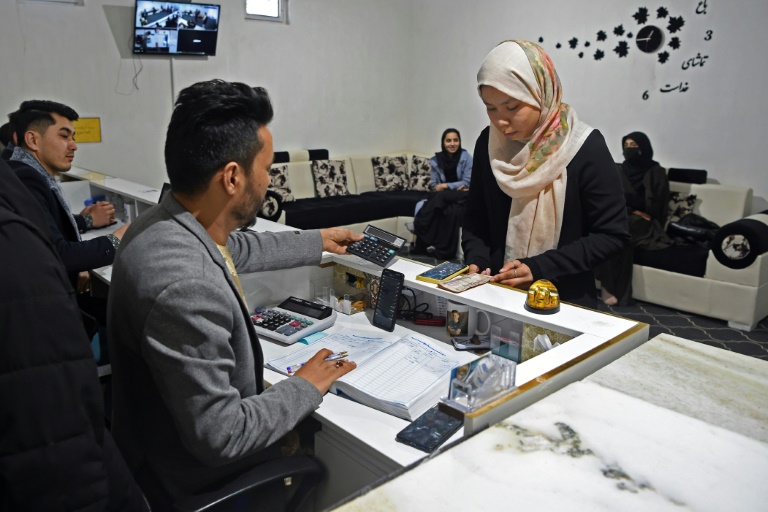 Crypto provides a solution for some in crisis-ridden Afghanistan

In the middle of a bazaar in western Afghanistan, Arezo Akrimi pulls out his smartphone and, after a few taps on the screen, exchanges some cryptocurrency for a bundle of hard cash.

Arezo, 19, is one of around 100 students in Herat who have been receiving around $200 a month in cryptocurrency since September thanks to an American NGO Code To Inspire.

This sum, which she converts at a currency exchange into Afghanis, is crucial for rent and to help feed her family of six.

Since the return of the Taliban in August, the Afghan economy has virtually collapsed and the country is in the grip of a crisis caused by the seizure of billions of dollars in assets held abroad.

But digital currencies and their decentralized architecture, insensitive to international sanctions, allow a handful of young Afghans to avoid the worst of the crisis.

“It was very surprising for me to learn that it could be used in Afghanistan,” Arezo told AFP. “It was really helpful.”

Code To Inspire was founded to teach computer programming to women in Herat, but its high-tech approach now also helps students raise funds in this economically disadvantaged country.

Bank transfers to Afghanistan are currently almost impossible, to prevent funds from falling into the hands of Islamic fundamentalists.

But even those with money in a bank are struggling to withdraw it – individuals are limited to withdrawing the equivalent of $200 a week and businesses $2,000.

Customers have to queue for hours even for these transactions.

The cryptocurrency transfers have allowed the NGO to circumvent these obstacles while ensuring that each donation reaches those who need it most, founder Fereshteh Forough told AFP.

“Crypto is an incredible way to overcome all kinds of political and economic sanctions, but also a tool that can change the lives of people living in an authoritarian regime,” says the American, whose parents fled Afghanistan in the 1980s.

To guarantee the financial security of its students, the NGO avoids paying them in bitcoins, the best-known cryptocurrency but whose price regularly fluctuates wildly.

Instead, it favors BUSD, a so-called “stablecoin” whose price is backed by the dollar.

Beyond this humanitarian initiative, cryptocurrencies are gaining other followers in Herat, according to forex trader Hamidullah Temori.

It has seen an influx of new customers over the past six months, many of whom regularly come to convert crypto-assets sent by relatives abroad into Afghans.

“Since the Taliban came to power (in cryptocurrency), transfers to and from abroad have increased by 80%,” he told AFP.

Transfers are instantaneous and commissions are much lower than transactions made through Western Union or hawala, the over-the-counter system traditionally favored by Afghans.

In Kabul, Noor Ahmad Haidar became a crypto-convert by force of circumstance.

The young man, who started exporting saffron to the United States, Britain, Australia and Canada in early 2021, now has 90% of his orders paid for in bitcoins.

“I avoid going through the chaotic process of bank transfers,” he says.

“Since August, it’s really become the only option available, and the most convenient for me.”

Its growing popularity in Afghanistan was noted by Chainalysis in its Global Cryptocurrency Adoption Index 2021, which ranked the country 20th out of 154 countries for “grassroots adoption”.

“I don’t think it’s just in response to the Taliban taking over,” says Kim Grauer, the company’s director of research.

“It’s also because we’re in a time where there are more and more solutions that allow you to trade cryptocurrencies on your phone and more people understand what it is.”

Yet while momentum is building, trading volume remains very low, and will remain so due to the lack of internet access and high levels of illiteracy in Afghanistan, she says.

But for those who can venture into this world, cryptocurrencies could be a lifeline.

In addition to his studies, Ruholamin Haqshanas writes from Herat for Indian media specializing in new technologies.

Since the rise of the Taliban, his salary, paid entirely in stablecoins, has enabled him to absorb galloping inflation and the free fall of the Afghans.

“Stablecoins offer very good protection against the loss of value of the currency”, assures the 22-year-old student, who now earns more than his doctor father.

The youngster is also trying to speculate in some of the more volatile cryptocurrencies, thanks to advice from a 13,000-member WhatsApp group in Herat.

Her classmate Parisa Rahamati earned $600 in February by hedging the price of decentralized currencies such as Ethereum and Avax – a windfall she shared with her widowed and unemployed mother.