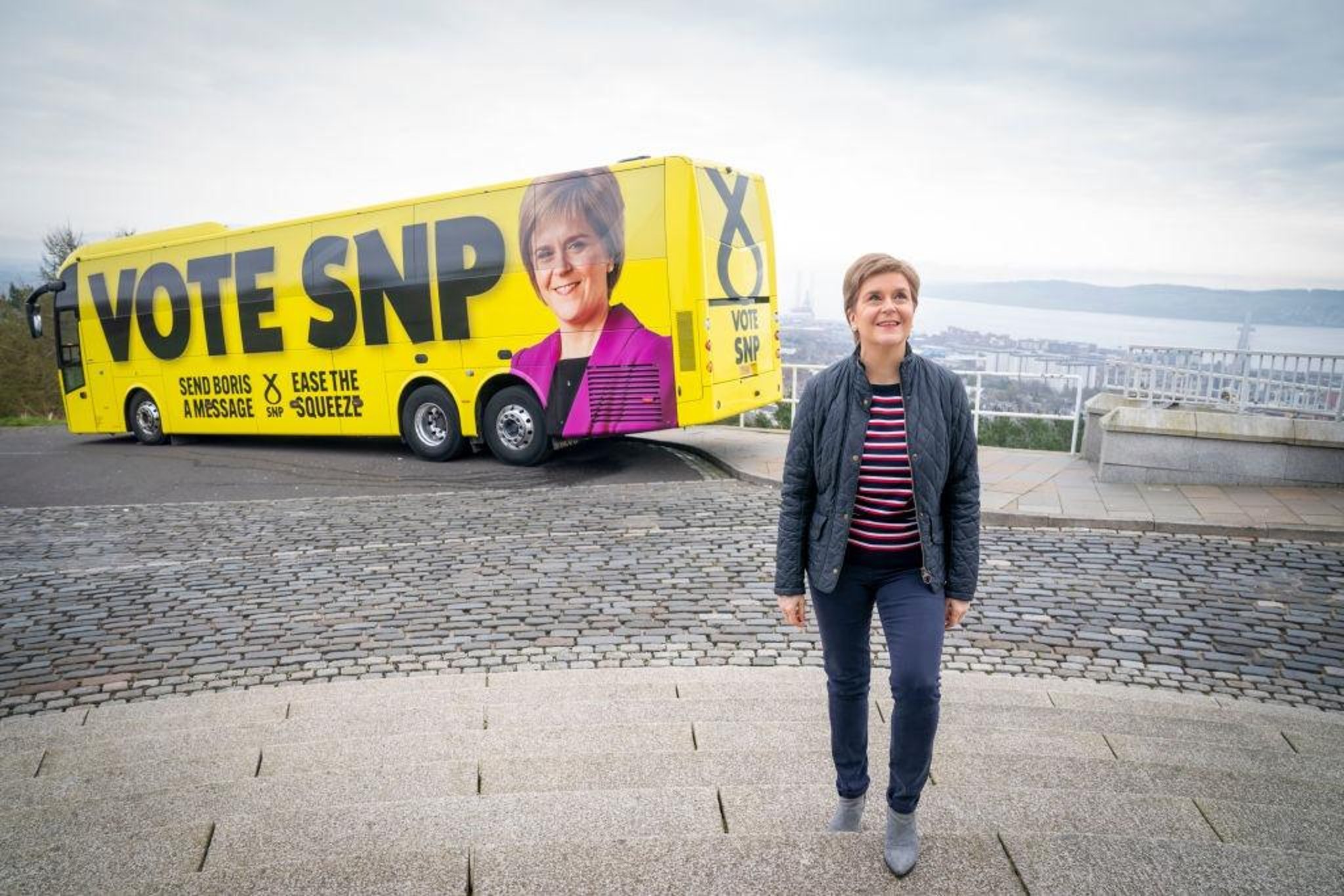 Letters from the readers: May election has nothing to do with Johnson

The councilors you can elect are responsible for these things. Ms. Sturgeon herself has no part in these things either, although she constantly makes sure that the local government is poorly funded, which makes their job much more difficult.

The choices you make on May 5 will determine the services you will receive for the next five years. Only the people whose names appear on the ballot are relevant. The others, including Ms. Sturgeon and Mr. Johnson, are not. It’s none of their business. The SNP message is as misleading as the big yellow bus showing a picture of Ms Sturgeon from ten years ago. They don’t have much left to offer, so fall back on old messages and images, none of which reflect today’s reality.

I agree with the April 16 Scotsman editorial saying the local election should be just that, referring to the SNP bus slogan, ‘Send Boris a message’. Typical election campaign, not just SNP, and that will probably work.

The problem is that Boris is not standing in local elections, and by diverting the message to national issues it deflects attention from the SNP’s poor local government record i.e. lack of funding . As I say, the tactic will probably work, and then the SNP, if successful, will claim a mandate for another referendum, Depressing!

In an interview with Scotland on Sunday, Nicola Sturgeon refused to apologize to islanders for the ferry problem. She chooses instead to “regret” the fiasco before hastily emphasizing that she does not regret “having saved the shipyard”. The number of jobs allegedly saved has now miraculously fallen from 300 to 400 – a claim that does not match the evidence. Reports from the Scottish Government’s Strategic Trade Interventions Division and Caledonian Maritime Assets Ltd for a 14-week period at the end of 2021 show that the number of people working on a hull fluctuated between 25 and 60, while the number for the other was in the 60s.; only four of those weeks did the number work on each top 100.

Also, we need to know how many of them were Scottish workers. Tim Hair, the pundit paid nearly £3,000 a day to ‘turn around’ the situation, often lamented that he couldn’t find enough local workers and had to import them from places like Romania. Does Ms Sturgeon ‘regret’ spending £300m of taxpayers’ money not to ‘save’ Scottish jobs but to give jobs to overseas workers?

But his most outrageous claim in this interview is surely that the Scottish government has been “completely transparent” on this issue! It remains unclear who ultimately signed the contract despite Ms Sturgeon’s malicious attempt to pin the blame on Derek Mackay. And crucially, who decided – and why – to ignore expert advice and waive a money-back guarantee clause, a “mandatory” provision to protect Scottish taxpayers from catastrophic losses? Even the Auditor General was unable to penetrate the SNP’s culture of secrecy to hide these crucial pieces of information. Never mind sending a message to Boris – send one to this incompetent, secretive cabal that is anything but stronger for Scotland.

Interview: Nicola Sturgeon on the ferry fiasco and a ‘next…

Former SNP Deputy Leader Jim Sillars has publicly stated that the SNP’s handling of the ferry fiasco has made our once leading shipbuilding industry the “laughingstock of the world”. Embarrassment is piling on embarrassment on top of industry-wide incompetence and lack of leadership.

Don’t forget that it is the party and the leaders who constantly demand more control over the economic levers. All I can say is that they show a jaw-dropping lack of basic ability, just the thought of them having more powers than they already have – and that they had a full control over the decision-making of the ferry fiasco – should send shivers down the spine of those who care about Scotland and its future.

John McLellan’s article, ‘Johnson Must Do the Right Thing’ (Perspective, April 16) concludes by stating that ‘the right thing is for Mr Johnson to go’. I do not agree. He is a fallible leader, as so many of our prime ministers have been and as are the current leaders of the opposition parties.

His supporters say that “he does the big things”, for example Ukraine, but, for me, what he seems to do well is that he is the only party leader, and one of the very few deputies and MSP, who is ready to define what a woman is. Mr Johnson told the Commons on March 22: ‘When it comes to distinguishing between a man and a woman, the fundamental facts of biology remain extremely important’ and went on to say that trans people should be treated with as much generosity and respect as possible. . For that alone, I will vote Conservative in local and national elections.

In his reasoned response to the commission of criminal offenses by Boris Johnson while Prime Minister and MP, Gordon Bannatyne (Letters, 16 April) suggests that the petty nature of the offenses means we should ‘not get carried away and let us look at the bigger picture”.

Included in the “big picture” is a prime minister who openly admits he lacks the intellectual capacity to understand what the letter of a mere law says. Beyond the moral values ​​of the principle “one rule for them and another for us”, should a person with such limited intellectual capacities lead a country in times of crisis?

Anyone who opposes a wind farm is often referred to as a “Nimby”. This is because they are usually quoted as describing them as eyesores or blots on the landscape. There is no doubt that these people also explain in detail, as only someone who actually lives next to a wind farm is able to, how it affects their lives due to the constant noise and flicker – not only during the day but also at night if they are unlucky enough to suffer from aviation lights on the turbines – as well as the fear that their property will be devalued or even rendered unsaleable.

These are some of the issues associated with living next to wind farms that are either ignored or perhaps not understood by city and town residents when giving their opinion in polls. Hence why we get results from polls such as the latest from YouGov claiming that “three-quarters of Britons would support a local wind farm”.

From information already received by campaign group Scotland Against Spin, through correspondence with YouGov, we can see that of the 1826 UK respondents to this survey (weighted results) there were only 157 respondents Scottish (0.0028% of the Scottish population) even though there were more onshore wind turbines in Scotland than in the rest of the UK countries combined. There is no information on where these respondents live in relation to a wind farm.

It’s easy to say you support wind farms in your neighborhood when you can be sure you never will.

Stephen Jardine (Perspective, April 16) says we need “changes in planning to stop [junk food] operators opening near the school and targeting children”. The problem, however, is not so much planning as licensing, as the Civic Government (Scotland) Act 1982 makes it clear that the functions of a licensing authority do not include the protection of public health, although a liquor licensing board is authorized to take this into account.

Asked about this apparent anomaly three years ago, particularly in the case of fast food vans prowling near schools, Joe Fitzpatrick, then Minister of Public Health, Sports and Welfare, responded with great languor speaking of “a holistic package”. guidance”, “a series of possible actions” and working “in collaboration”, confidently stating that these actions and others in their “delivery plan” should help “achieve our ambition to halve the childhood obesity”. Over the past three years, this does not seem to have been particularly successful.

Unfortunately the Minister has shown no interest, and neither have his successors, in giving councils the power to control the location of fast food providers in relation to schools, which would be well within the powers of the Scottish Government s they were so witty.

One can only conclude that the Scottish government simply does not care about the health of impressionable pupils, failing to protect them from a daily diet of junk food; in fact one could say that they make “burger all”.

Your thoughts are welcome. Write to [email protected] including name, address and telephone number – we will not print all the details. Keep letters under 300 words, with no attachments, and avoid “letters to the editor/readers” or the like in your subject line. If you refer to an article, include the date, page number and title.

Find out how to sign up and get new offers