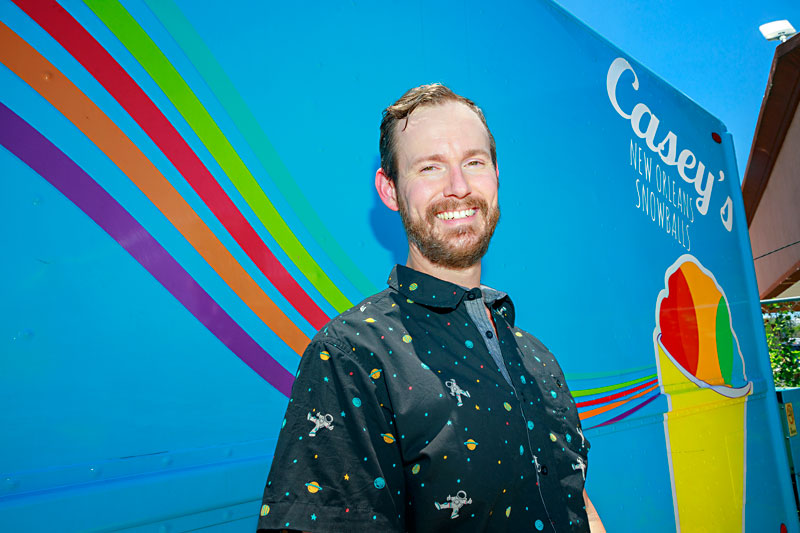 What’s the difference, really? Between a so-called snowball and most of the other frozen water confections that are available in trucks and trailers and more permanent structures all over this city during our warmer months? Isn’t everything just ice, ice, baby?

“The difference is in how it’s done,” says Mars Chapman, the man who owns and runs Casey’s New Orleans Snowballs, the little frozen treat powerhouse that graces the intersection of Airport Boulevard and 51st Street. for more than two decades. “Traditionally, your sno-cone, you’re going to take ice cubes and put them in a machine that grinds them up – so what you get are these little crunchy spheres, basically. They don’t really pack very well , and when you pour syrup on it, most of it goes all the way to the bottom. As we take a block of ice and put it through a machine that shaves it, making these fluffy little snowflakes, and so when we pack together in a cup, they’re kind of like a sponge that holds the syrup, distributes it more evenly throughout the cup – and that snow is just super soft and velvety and melts in your mouth. That’s the difference.

The whole story of how this beloved neighborhood icon was created and how it evolved over the years is told at length on the company’s website, so we’ll summarize it for you here. In 1996, Suzy Casey Gallagher and Kit Thompson, a couple from Louisiana, decided to replicate the Metairie family business in Austin. “I think they had a trailer on the Drag for a year or two,” Chapman says, “before they bought and remodeled the space where we are now. I discovered this place on the 51st when I was under 10: My aunt brought me here several times, then I started coming here with my mother and father.”

Chapman’s mother and father – Pattye Henderson and Cliff Chapman – raved about the frozen treat business, its frozen treats and the welcoming community that surrounds it. “So my dad got a job washing bottles here,” Chapman says, “and then he learned to make snowballs.” And finally decided, with the blessing of his employers, to create a place similar to him on the other side of town. “In 2000, we went to Alabama to pick up a trailer, stopped in New Orleans and refueled on the way back, and, well, it snowballed from there. “

This snowball, says the 30-something with a serious smile and the sparkling eyes of an entrepreneur. He remembers how his parents worked their own caravan, called Raspas, on Anderson Lane for seven years, remembers what it was like growing up in this family business.

“My very first job was working for my parents, harvesting ice. And we started in a way that – I will own it entirely – wasn’t exactly up to code: we were making ice from from our dining room We had a commercial block ice machine in there, and the condenser for it was under the house – we lived in a pillar and beam house in Hyde Park – and we had a freezer from the ‘other side of the door. in there, do all the ice cream. And, obviously, you’re not supposed to do that – but that was many years ago. We haven’t done it like that since a long time – I want to be very clear about this!”

The Raspas company was sold to a former employee in 2008 so that Chapman’s parents could take Casey’s back to its original owners. Then, with much time passing and retirement ensuing for the avid snowballing couple of Pattye and Cliff, the business passed to their son Mars and longtime colleague Kyle Littlepage. And now, at the end of a pandemic and accelerating global warming, it’s just Mars Chapman as the big boss, overseeing a merry crew of ice cream parlors in a place that’s only open. . seasonally?

“People always think we open on Memorial Day,” Chapman says. “But we don’t – we open March 1 or thereabouts. And we stay open until about Halloween. We’re closed for about four months of every year and open for eight months.”

Is the crew really happy? They seem happy enough as they greet you at the window and take your order for something sweet and cold to soothe your heat-assaulted senses. But is Casey’s really a good place to work? Chapman, who has aligned the company with the progressive Good Work Austin collective, is trying to make sure. “We guarantee that all of our servers are earning at least $15 an hour – they are paid a base salary and we group tips by pay period. And we add a highly subsidized primary care benefit for our staff, so for about $15 a month, they can call a doctor And, yeah, that’s just direct care, that’s not health insurance – but it’s Something. And I have a position that if a snowball shop can do that, why can’t someone else? If we can find a way, with this seasonal business model, to treat people well and provide subsidized health care, that’s what all businesses should be doing. Casey’s is far from perfect, but we will always try to do the right thing if we can.”

And what is one of the best things they can do for their clients? To provide respite from the harsh Texas sun, we suggest – continuing to serve the snowballs we love the most. Who are what, exactly?

Chapman relishes the question, his taste buds obviously being familiar with the products he promotes so vigorously. “The most popular flavors of the regular flavors are Strawberry, Pineapple, Tiger’s Blood – which is a blend of strawberry and coconut – and Mango. And our most popular creamy flavor is Strawberry Cheesecake , which tastes just as you think it does, and all the others are fighting for second place.”

Yes, let’s not forget those creamy flavors: it’s the not-so-secret weapon that sets Casey’s goodness line apart from so many others.

“Our creamy flavors are unique to us,” confirms Chapman. “They’re typical New Orleans, creamy and dessert flavors, and we offer several varieties: Orchid Cream Vanilla, which tastes like marshmallows in Lucky Charms; and the Dreamsicle, which is orange cream and vanilla bean; and the Boston Cream Pie – it’s custard syrup with a cream filling and chocolate drizzled on top, and it’s my favorite. The custard is the flavor the most underrated on our menu. If you put pastry cream and almost any other flavor, and a little vanilla and cream, it will make a pie or a cobbler or some kind of muffin [of] thing. So if you take blueberries and sour apples and add them to that, you’ll get that delicious apple pie flavor.”

Your reporter, having skipped lunch, is about to drool at this point. This effect is mixed, although, like him, an ardent enemy of Spicata mintsuddenly notices that the flavor is listed among the non-creamy options on Casey’s menu.

What is this betrayal? Why must there be a filthy snake among the wonders of snowball heaven?

“Spearmint is not going away,” Chapman insists, “because it’s a classic New Orleans flavor. So as long as we call ourselves Casey’s New Orleans Snowballs, we’ll have it on the menu. Because if anyone ‘one comes here from Louisiana, he’ll be like, ‘You say you’re New Orleans snowballs, but you don’t have spearmint? You are not real. So we keep it.”

They will also keep the longtime store at 51st and the airport, although plans are underway for a remodel. And when – ifChapman points out, because it depends on the funds available – when the remodeling is underway, it will not interrupt the service as it would for other companies: because seasonal, remember? We remembered, and to complete this story, we had to ask. Not about a potential remodeling action, but just in general: what happens during the four months of Casey’s closure?

And this place just…hangs out?

“This place is dragging,” Chapman agrees. “And it sucks money – that’s what it does.

“When my mom and dad bought the business, they also bought the property. And that’s a godsend because of how expensive property taxes are and rent. are not involved in the business at all, the fact that we pay them rent, it’s a way for the money to stay in the family, otherwise if we had paid that, it would drastically change the economic viability business for us.

Chapman’s gaze wanders around the interior of his store, taking in the storefront and line of customers beyond, the stainless steel tables and neatly arranged bottles of syrup in the prep area, the shaving equipment of ice cream and its lively team of young workers. He smiled, nodding, more satisfied than melancholy.

“No one gets rich snowballing,” he says, “but it’s a great quality of life.”

The Friends Experience is finally in Toronto (PHOTOS)