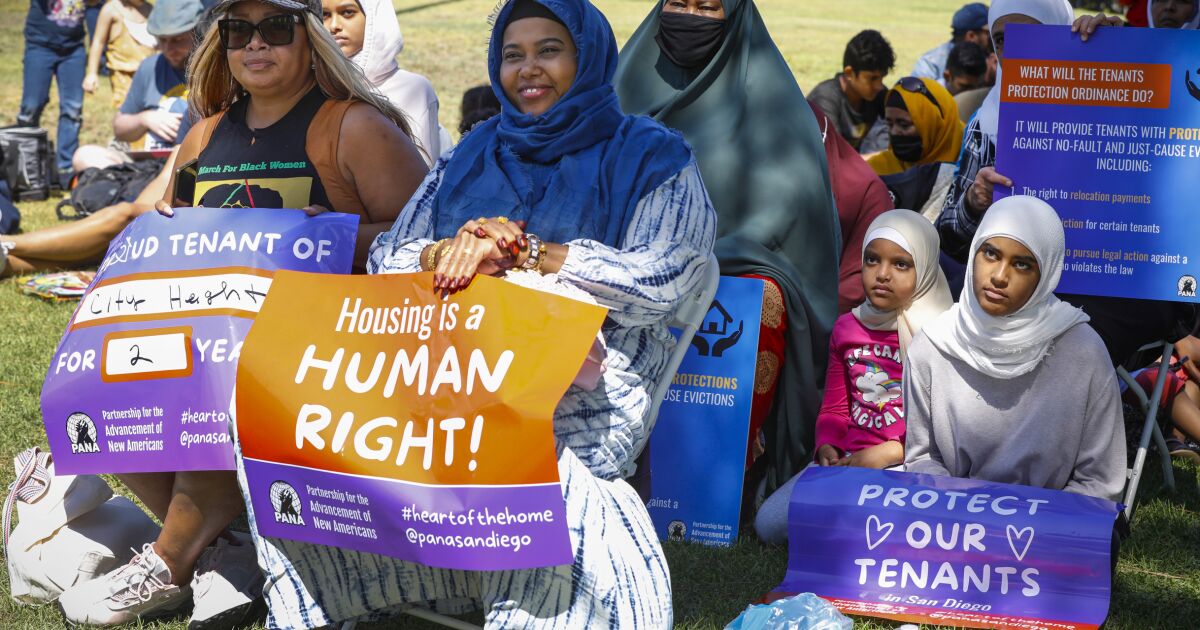 San Diego reviewed a wide variety of new tenant protections Monday in a special meeting as roaming and economic concerns for tenants persist.

As part of the meeting, the city council also worked on a resolution to declare “housing as a human right” – something that received support from various tenants, homeless and environmental groups – but failed. upset some homeowner groups.

The council did not formalize anything but held the meeting to consider future action. New laws and resolution must be considered by the city prosecutor’s office and voted on at a later date which has not been set. The governing body also discussed forming a committee to further discuss some of the ideas.

Council Speaker Sean Elo-Rivera said the meeting was a good first step and imagined the city would be in a better position today if it had declared the right to housing 20 to 30 years ago.

“Do we want the city to be a city that accepts suffering and indignities on our streets? he said. “Or do we want to be a city – and ready to record – that says everyone deserves a roof over their head?”

The draft text of the resolution said San Diego would support policies aimed at keeping people housed in homes that are affordable, accessible and livable. Small owners and owner groups raised concerns about the policies and hoped the proposals would be reworked before being voted on.

Contrary to state law, San Diego does not require landlords to pay one month’s rent, or waive the last month, when a tenant receives a no-fault eviction notice. Because of this, many council members said the city needs to update its laws.

The majority of the meeting was devoted to a framework of new laws that would give stronger protections to tenants. Many owners showed a united front against the new proposals, arguing that they had not been consulted on the framework but offered to make themselves available for future discussions.

“We would like the time to provide clarity and depth to our concerns,” said Lisa Mason, director of asset management at Baldwin & Sons.

There is no guarantee that new ideas proposed will remain the same when, or if, the board votes on them. Some of the new rules the council considered on Monday:

Some of the proposals stemmed from issues that arose as the city aimed to prevent evictions during COVID-19. During the pandemic, a landlord was allowed to remove a tenant if they planned to move a family member into the property. Some tenants claimed that a family member had never moved in. The draft order states that if a family member does not occupy the property within 90 days, the withdrawn tenant should have the right of first refusal to return.

Tenants and advocates shared stories of how difficult it is to live in San Diego with rising rents and the difficulty of staying in the same unit for long periods of time.

“I’m constantly afraid of losing my home,” said Safy Hassan, a Somali immigrant who said, through a translator, that she had lived in San Diego for 20 years.

San Diego Tenants United’s Rafael Bautista took advantage of the Halloween gathering to wear a pig mask, which he says represents the evils of capitalism. He said no-fault evictions are on the rise across the region and the tenants’ union is trying to help by notifying landlords when they are in violation.

“We’re talking about landowners who have way too much power,” Bautista said, “who take advantage of the vulnerabilities of San Diego residents.”

Many homeowners called to say they were also facing rising costs and already felt overwhelmed by a patchwork of state and local laws. Lucinda Lilley, president of the Southern California Rental Housing Association, said landlords are working hard to work with tenants who may have rent issues and other issues. She said their group is committed to helping the city develop new laws.

Council members said after nearly four hours of public comment they were willing to work with landlords as they considered new laws to strengthen tenant protections.