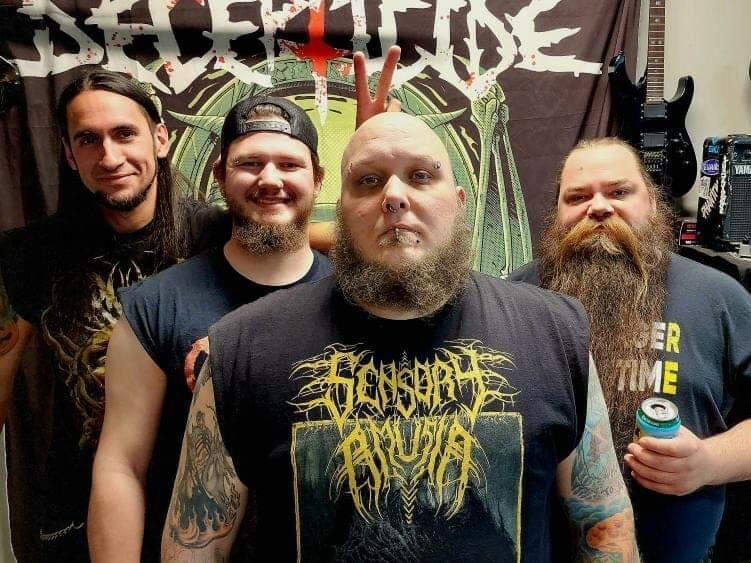 Musically, Anchorage is a pretty, transient town. It’s not uncommon for groups, rooms, and even entire stages to appear and dissipate seemingly overnight. So when a band sticks around for a while, musicians and spectators in the 49th state tend to sit in, notice, and attend the shows almost religiously. Local legends of this caliber include bands like metalcore band 36 Crazyfists, ska band Nervis Rex – and thrash metal rockers Decepticide, who have been rocking venues across Alaska for nearly fifteen years.

“January 1, 2008,” says Decepticide lead singer Ryan Hull of the band’s origins. “It was during a New Year’s party.”

Enzo Montana, the Decepticide guitarist with the requisite long hair of a career headbanger, lazily plucks a few chords in the band’s small practice space in Midtown, which is adorned from top to bottom with various band flags and posters – Slayer , Metallica, Motorhead.

“The first time I saw Enzo was my freshman year in high school,” said bearded Decepticide drummer Brian Harris. “He was sitting on his amp in the dining room, playing ‘Master of Puppets’.”

Both Harris and Montana attended Dimond High School, along with Mercy Cofield, the guitarist for hardcore Anchorage band She.

Decepticide emerged from the remnants of the Montana band Murder is Justice, a project that lasted from 2005 to 2007. Originally a five-piece band with two guitars, Decepticide has been downsized to four members since 2016, with a position as semi-turning bassist who was recently filled in by North Carolina transplant Josiah Everett, the band’s youngest member, who met Hull through a warehouse job and took over as bassist in 2022.

“It’s like ‘Spinal Tap’, with the drummers,” Hull said. “We went through a lottery of bass players.”

After playing successfully for a few years in Anchorage, Montana wanted to take Decepticide to the next level.

“When we started Decepticide…I really thought we had a chance to be a real metal band, a touring band,” Montana said. “At the same time, being here in Alaska, it’s kind of impossible to accomplish that.”

In 2010, the band moved to Pennsylvania to pursue a touring career on the East Coast. However, personal issues (including the pregnancies of Montana’s and Hull’s girlfriends) hampered their ability to perform.

“We were being pulled back into Alaska from all directions,” Montana said.

In October 2010, Montana returned home to attend the birth of his daughter. The guitarist’s desire to break his family history of absentee fathers contributed to Decepticide’s eventual return to Alaska.

“I called Ryan and said, ‘I’m so sorry, but I have to come back,'” Montana said.

“I joke about this a lot, but Alaska is a black hole,” Hull said. “And I’m not necessarily saying this as a bad thing, but when you leave Alaska, there are so many gravitational pulls that take you home.”

In December 2010 the band was back, and it has been an Alaskan band ever since.

To some degree, Hull, Montana and Harris look back on their experience in Pennsylvania with regret — especially since by the time Decepticide left, news of their musical prowess was just reaching promoters on the East Coast.

“A lot of people first thought, a bunch from Alaska, that we were a gimmick,” Hull said. “But our names started to go around a lot.”

It feels like, had things gone differently in Pennsylvania, Decepticide might have been a household name among metalheads, given the band’s enthusiasm, passion, and technical skill.

Decepticide’s sound, influenced by favorites like Pantera, the Black Dahlia Murder and Lamb of God, has remained relatively consistent since the band began playing.

“If you’ve listened to our music,” Montana said, “it’s evolved, but it hasn’t changed drastically. I think it got heavier and faster, but it didn’t change into something you can’t recognize.

One of the biggest problems with the local music scene, Decepticide pointed out, was the lack of venues for all ages in Anchorage.

“It’s not about filling a new generation of bands to play,” Hull said, “because they have nowhere to play.”

A number of venues for all ages have existed, from the Paddleboat Cafe to Anchorage Community Works, but for one reason or another they have folded or otherwise become inaccessible to young people in Anchorage. Without a reliable place for those under 21 to access live aggressive music, there is no guarantee that metal, hardcore and punk will continue to exist in our city.

“If me and Enzo didn’t have a place to play when we arrived,” Harris said, “it never would have happened.”

As such, bars have become the default, given the lack of an under-21 venue.

“Right now, Chilkoot Charlie’s is the only house that really lets us come in and put on a show,” Montana said. “I think our second home is the Carousel Lounge.”

Chilkoot’s, the band acknowledges, has been good to them, as has local heavy metal promoter Sarah Pederson. Decepticide, along with several other members of the Anchorage metal scene, recently played a gig at the bar in support of Pederson, who is currently battling cancer.

Incidentally, the first time I saw Decepticide live was on the Chilkoot benefit show. Their set was electric, high energy and loud as hell. Hull swirled screaming back and forth across the small stage as Montana sent rippling power chords across the room. Harris’ drum fills and bass kicks were like machinery from a massive sound factory, while Everett’s bass line throbbed beneath it all like a pounding heartbeat. Accompanied by other local hardcore and metal artists, including Part Time Super Heroes and Mindful Khaos, Decepticide exemplified some of Anchorage’s finest thrash.

With the exception of Everett (who Hull calls the band’s adopted son), the members of Decepticide are all family men, which affects their musical schedule and lifestyle. But that doesn’t take away from the bond the band members share, that they’ve worked to maintain.

“Right now, with full-time jobs and full-time families, is when we as a group can interact, outside of the shows,” Hull said, referring to the practice of band. “That’s where we meet, and that’s where we continue our brotherhood and our friendships. That’s where we see each other.”

“If I didn’t have this,” Harris asked, “what the fuck would I have?”

Outside of their families, Decepticide is the band’s biggest project.

The band’s journey into metal was almost predestined. Hull’s first introduction to thrash was in the form of 2 CDs from a friend – “Cowboys From Hell” by Pantera and “Diabolus in Musica” by Slayer.

“[Metal’s] the only kind of music that gives me goosebumps,” Hull said. “I can’t imagine my life without it. It’s literally the only thing I listen to.

Harris remembers a tape taken on the school bus in third grade – “Americana” by Offspring.

“I was playing it really loud, I was singing it really loud, and it was full of a bunch of mean, mean words,” Harris said. “The road has been very long. I don’t know how to tell you how I got here. I can tell you that my biggest influences were Offspring, AC/DC, CKY, Black Dahlia Murder.

Montana pointed to influences such as Shadows Fall, Lamb of God, Sepultura and, of course, Metallica – a touchstone for all metal bands since “Kill ‘Em All” came out and changed the game forever.

Everett recalls that video games like Guitar Hero shaped his experience with heavy metal as a child — something that many young musicians coming of age in the digital age can relate to. Pop punk like Blink-182 and the Offspring also influenced the bassist’s sound,

“Growing up, my mom always played Motley Crue, Def Leppard, Poison, bullshit like that in the car,” Everett said. “At twelve, I was listening to Cannibal Corpse, Dying Fetus, Autopsy.”

When it comes to the best of thrash metal’s “Big 4” – Metallica, Slayer, Anthrax and Megadeth – Hull and Everett are firmly in Metallica’s camp, while Montana and Harris vouch for Slayer supremacy.

“I can’t take anything from Slayer and put it against ‘Battery’ or ‘For Whom The Bell Tolls,'” Hull explained.

Authenticity is important to every member of the band, and one thing is evident to anyone who has attended one of their concerts: the love of Decepticide playing. Hull, Harris, Montana and Everett play each gig with heart, enthusiasm and genuine respect for the bands that came before them. In every bass riff, guitar lick, drum fill, and shrill scream, you can find a high school kid learning the “Master of Puppets” chords between classes – and so it is, regardless of location or genre, that the music scene progresses and spreads. from generation to generation.

You can find Decepticide on Facebook (https://www.facebook.com/decepticide) and Instagram (@decepticide). The band has tentative plans for a 15th anniversary show in January and will post more details on social media as events are finalized.