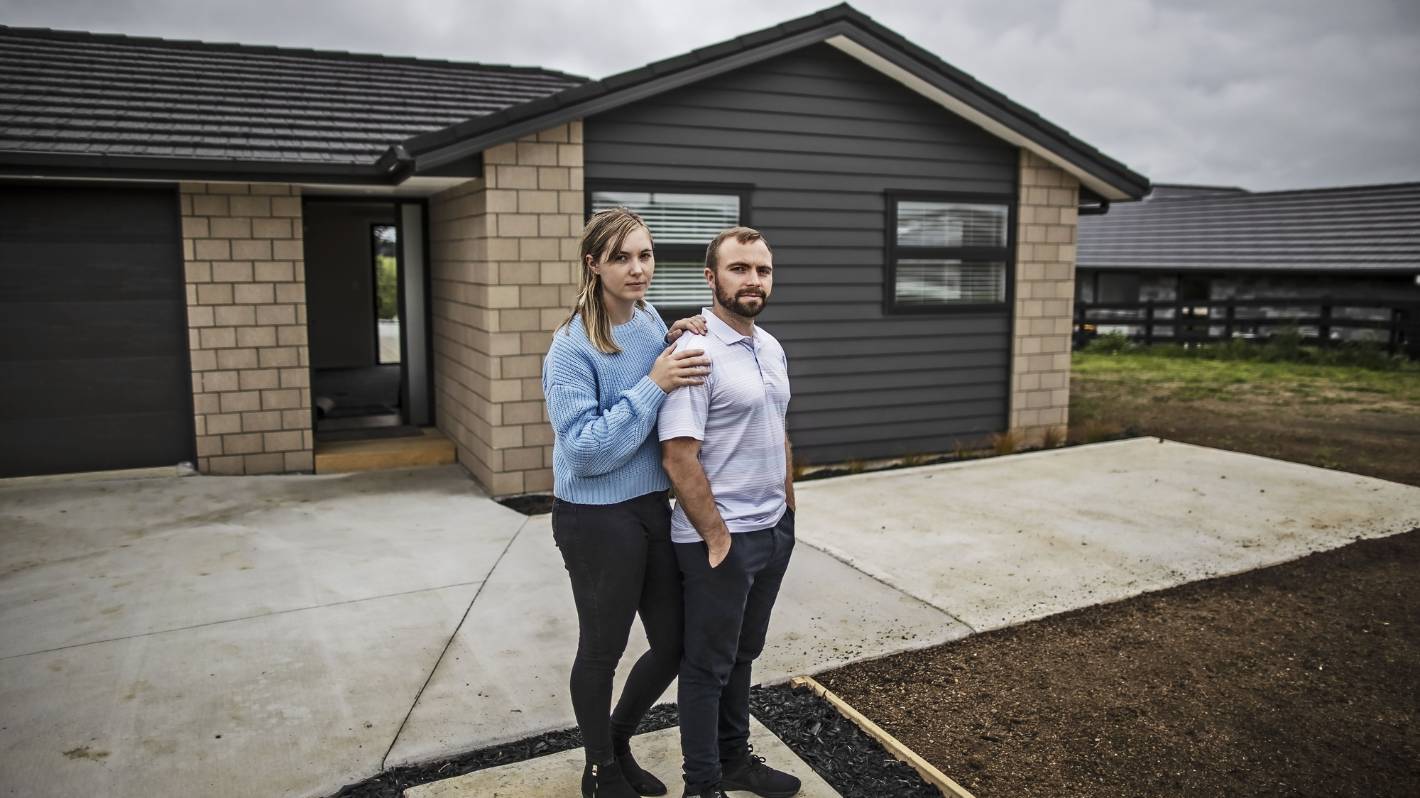 Two years after signing the building contract, the couple are still waiting for their home

Ashley and Kerryn Croudis thought they were safe to build their first home with Dean Lister, who they thought was a member of Registered Master Builders and part of a national construction company called Build 7.

They signed their contract in July 2020 and say the work was originally due to be completed by April 2021. But they are still waiting and are now facing delays in obtaining their code compliance certificate.

The Croudis are not alone; other Lister customers still only have concrete slabs or graded sites and retaining walls after two years, and some are struggling to get their deposit money back after contracts are canceled.

Some also never received a main construction guarantee that they thought they had paid for.

Lister says Covid-19 has created financial pressure. He said one of his clients was relying on payment from other builders to keep his projects on track, raising concerns about the stability of his business.

Kerryn Croudis says she and her husband’s plan was to move into their home in Glenbrook, South Auckland, with their newborn baby.

Their son is now 16 months old and they still don’t know when they might move out.

“It’s disappointing to be our first home, the initial experience was really positive but when things started to go wrong, and the lack of communication, we really lost faith in him [Lister],” she says.

Two other Glenbrook development clients, Elise Stanghan and Allan Pope, say they have put their plans for a baby on hold due to construction delays.

Stanghan says the couple lived with family and friends because paying rent and a mortgage was too expensive.

They can no longer afford to build and are considering selling their section and buying an existing house.

The couple signed their contract with Lister in August 2020 and say that after two years and $88,000 paid, they only have a retaining wall and graded site to show off, along with plans and consent.

Stanghan and Pope’s attorney drafted a mutual release agreement, which included an agreement that Lister would repay $18,599 from the couple’s deposit.

They say they never received a response or refund, and on September 10, with the help of another lawyer, an email was sent stating that Lister was deemed to have abandoned the contract.

“Dean never responded, and it’s been about three months since we last heard from him,” Pope said.

Lister says Eleven Limited is negotiating resolutions for some of its construction contracts, and he cannot comment.

“However, I can confirm that Eleven Limited intends to do the right thing for its clients and seek to resolve any issues directly with the parties to ensure that they can proceed with their construction projects.”

Before the pair decided whether to try and exit the contract, Stanghan recorded a phone call with Lister, in which he said he was expecting money from other contracts to spend on their construction.

“The biggest problem I have is that I can’t afford to pay people up front at the moment to go there. That’s my biggest problem, so what I have to do is get funds from other jobs and then slide the money aside to get yours up and running, and that’s proving quite difficult,” he said.

The couple worried that Lister would depend on signing more clients to cover work on existing contracts.

Joanna Pidgeon, director of Pidgeon Judd Law in Auckland, says using money from one job to advance another is worrying and could suggest solvency issues. Trading while insolvent is illegal.

She says insolvency proceedings are usually initiated by contractors who have not been paid, rather than clients who have not received housing on time.

Lister said Eleven Limited had had its share of difficulties during the pandemic, like the majority of the construction industry.

He said the ripple effect was that Eleven Limited had to fund projects.

“Where possible, I would ask clients to pay contractors upfront, so it wouldn’t delay their construction contracts,” he says.

Phillip and Fransesca Smith are another couple from the Glenbrook development who are trying to claim money from Lister after their build stalled.

More than two years after signing a construction contract, a concrete foundation has been completed.

The couple are represented by law firm Turner Hopkins, which sent a letter canceling the contract in July and demanded $70,000 of their deposit, but the couple say they have not heard back.

The Croudis used social media and an email mistakenly sent to several customers to round up a group of Lister customers.

They say that although the process has been financially and mentally stressful, having had to pay rent and a mortgage due to delays, they are grateful to have a house almost completed.

Lister emailed them in August agreeing “without prejudice” to reimburse them $18,915 after the couple paid the council directly for the water connection, but Kerryn says the reimbursement has yet to be made. been carried out.

Build 7 director Alan Butcher says Lister left the company in December 2020 and was asked to stop using the brand.

He says Build 7 started out as a franchise business, but he pulled the pin because he didn’t believe in the model.

He says it’s no longer just a marketing business, and floor plans and customer testimonials on the company’s website were “all part of the marketing.”

Registered Master Builders managing director David Kelly confirmed that Eleven Limited, of which Lister is the director and sole shareholder, was not a current active member of the organisation.

“During their membership with Eleven Limited, there were several claims for the main build warranty that were denied,” Kelly said.

“This was due to a variety of reasons, including non-payment of security received by Master Build Services, insufficient information received, and contractual payment schedules not meeting Master Build Services’ requirements, for example, deposits requested were above the recommended threshold of 10%.

Kelly says some assessments of the estimated costs of Eleven Limited’s builds have also proven to be inappropriate.

“Due to ongoing discussions with the director, we cannot provide any additional information at this time.”

Pidgeon said the number one rule on new construction is to not pay too much up front and pay for the job as it is completed.

“I like to include extra clauses in my contract, requiring them to build without interruption, to avoid big time gaps and fights over whether the work is done in a reasonable period of time or not,” says -she.

Best Sites to Get Used Designer Goods on a Budget